Predecessors
Chess - As you begin to love playing this online chess game, get a know-how of the history of the chess game. Chess is believed to have originated in northwest India during the Gupta empire, where its early form in the 6th century was known as chaturanga (Sanskrit: four divisions [of the military] – infantry, cavalry, elephants, and chariotry, represented by the pieces that would evolve into the modern pawn, knight, bishop, and rook, respectively). According to both chess historians Gerhard Josten and Isaak Linder "the early beginnings" of chess can be traced back to the Kushan Empire in Ancient Afghanistan (G. Josten, "Chess – a living fossil"). The earliest evidence of chess is found in the neighboring Sassanid Persia around 600, where the game came to be known by the name chatrang. Chatrang is evoked in three epic romances written in Pahlavi (Middle Persian). Chatrang was taken up by the Muslim world after the Islamic conquest of Persia (633–44), where it was then named shatranj, with the pieces largely retaining their Persian names. In Spanish "shatranj" was rendered as ajedrez ("al-shatranj"), in Portuguese as xadrez, and in Greek (zatrikion, which comes directly from the Persian chatrang), but in the rest of Europe it was replaced by versions of the Persian shah ("king"), which was familiar as an exclamation and became the English words "check" and "chess". Murray theorized that Muslim traders came to European seaports with ornamental chess kings as curios before they brought the game of chess. 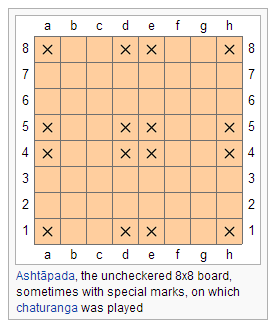 The game reached Western Europe and Russia by at least three routes, the earliest being in the 9th century. By the year 1000 it had spread throughout Europe. Introduced into the Iberian Peninsula by the Moors in the 10th century, it was described in a famous 13th-century manuscript covering shatranj, backgammon, and dice named the Libro de los juegos. Another theory contends that chess arose from the game xiangqi (Chinese chess) or one of its predecessors, although this has been contested.

Origins of the modern game (1000–1850)
Around 1200, the rules of shatranj started to be modified in southern Europe, and around 1475, several major changes made the game essentially as it is known today. These modern rules for the basic moves had been adopted in Italy and Spain. Pawns gained the option of advancing two squares on their first move, while bishops and queens acquired their modern abilities. The queen replaced the earlier vizier chess piece towards the end of the 10th century and by the 15th century had become the most powerful piece; consequently modern chess was referred to as "Queen's Chess" or "Mad Queen Chess". These new rules quickly spread throughout western Europe. The rules about stalemate were finalized in the early 19th century. To distinguish it from its predecessors, this version of the rules is sometimes referred to as Western chess or international chess. 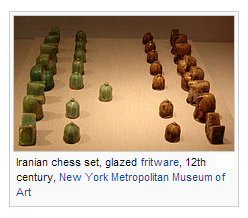 In the 18th century, the center of European chess life moved from the Southern European countries to France. The two most important French masters were François-André Danican Philidor, a musician by profession, who discovered the importance of pawns for chess strategy, and later Louis-Charles Mahé de La Bourdonnais, who won a famous series of matches with the Irish master Alexander McDonnell in 1834. Centers of chess activity in this period were coffee houses in big European cities like Café de la Régence in Paris and Simpson's Divan in London. 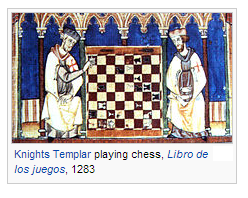 As the 19th century progressed, chess organization developed quickly. Many chess clubs, chess books, and chess journals appeared. There were correspondence matches between cities; for example, the London Chess Club played against the Edinburgh Chess Club in 1824. Chess problems became a regular part of 19th-century newspapers; Bernhard Horwitz, Josef Kling, and Samuel Loyd composed some of the most influential problems. In 1843, von der Lasa published his and Bilguer's Handbuch des Schachspiels (Handbook of Chess), the first comprehensive manual of chess theory.

Birth of a sport (1850–1945)
The first modern chess tournament was organized by Howard Staunton, a leading English chess player, and was held in London in 1851. It was won by the relatively unknown German Adolf Anderssen, who was hailed as the leading chess master, and his brilliant, energetic attacking style became typical for the time, although it was later regarded as strategically shallow. Sparkling games like Anderssen's Immortal game and Evergreen game or Morphy's Opera game were regarded as the highest possible summit of the chess art.

Deeper insight into the nature of chess came with two younger players. American Paul Morphy, an extraordinary chess prodigy, won against all important competitors (except Howard Staunton, who refused to play), including Anderssen, during his short chess career between 1857 and 1863. Morphy's success stemmed from a combination of brilliant attacks and sound strategy; he intuitively knew how to prepare attacks. Prague-born Wilhelm Steinitz later described how to avoid weaknesses in one's own position and how to create and exploit such weaknesses in the opponent's position. The scientific approach and positional understanding of Steinitz revolutionized the game. Steinitz was the first to break a position down into its components. Before Steinitz, players brought their queen out early, did not completely develop their other pieces, and mounted a quick attack on the opposing king, which either succeeded or failed. The level of defense was poor and players did not form any deep plan. In addition to his theoretical achievements, Steinitz founded an important tradition: his triumph over the leading German master Johannes Zukertort in 1886 is regarded as the first official World Chess Championship. Steinitz lost his crown in 1894 to a much younger player, the German mathematician Emanuel Lasker, who maintained this title for 27 years, the longest tenure of all World Champions.

Post-war era (1945 and later)
After the death of Alekhine, a new World Champion was sought. FIDE, who have controlled the title since then (except for one interruption), ran a tournament of elite players. The winner of the 1948 tournament, Russian Mikhail Botvinnik, started an era of Soviet dominance in the chess world. Until the end of the Soviet Union, there was only one non-Soviet champion, American Bobby Fischer (champion 1972–75). Botvinnik revolutionized opening theory. Previously Black strove for equality, to neutralize White's first-move advantage. As Black, Botvinnik strove for the initiative from the beginning. In the previous informal system of World Championships, the current champion decided which challenger he would play for the title and the challenger was forced to seek sponsors for the match. FIDE set up a new system of qualifying tournaments and matches. The world's strongest players were seeded into Interzonal tournaments, where they were joined by players who had qualified from Zonal tournaments. The leading finishers in these Interzonals would go on the "Candidates" stage, which was initially a tournament, and later a series of knockout matches. The winner of the Candidates would then play the reigning champion for the title. A champion defeated in a match had a right to play a rematch a year later. This system operated on a three-year cycle. Botvinnik participated in championship matches over a period of fifteen years. He won the world championship tournament in 1948 and retained the title in tied matches in 1951 and 1954. In 1957, he lost to Vasily Smyslov, but regained the title in a rematch in 1958. In 1960, he lost the title to the 23-year-old Latvian prodigy Mikhail Tal, an accomplished tactician and attacking player. Botvinnik again regained the title in a rematch in 1961. 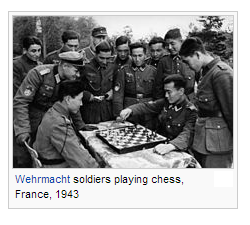 Following the 1961 event, FIDE abolished the automatic right of a deposed champion to a rematch, and the next champion, Armenian Tigran Petrosian, a player renowned for his defensive and positional skills, held the title for two cycles, 1963–69. His successor, Boris Spassky from Russia (champion 1969–72), won games in both positional and sharp tactical style. The next championship, the so-called Match of the Century, saw the first non-Soviet challenger since World War II, American Bobby Fischer, who defeated his Candidates opponents by unheard-of margins and clearly won the world championship match. In 1975, however, Fischer refused to defend his title against Soviet Anatoly Karpov when FIDE did not meet his demands, and Karpov obtained the title by default. Fischer modernized many aspects of chess, especially by extensively preparing openings.

Karpov defended his title twice against Viktor Korchnoi and dominated the 1970s and early 1980s with a string of tournament successes. Karpov's reign finally ended in 1985 at the hands of Garry Kasparov, another Soviet player from Baku, Azerbaijan. Kasparov and Karpov contested five world title matches between 1984 and 1990; Karpov never won his title back. In 1993, Garry Kasparov and Nigel Short broke with FIDE to organize their own match for the title and formed a competing Professional Chess Association (PCA). From then until 2006, there were two simultaneous World Champions and World Championships: the PCA or Classical champion extending the Steinitzian tradition in which the current champion plays a challenger in a series of many games, and the other following FIDE's new format of many players competing in a tournament to determine the champion. Kasparov lost his Classical title in 2000 to Vladimir Kramnik of Russia. The World Chess Championship 2006, in which Kramnik beat the FIDE World Champion Veselin Topalov, reunified the titles and made Kramnik the undisputed World Chess Champion. In September 2007, he lost the title to Viswanathan Anand of India, who won the championship tournament in Mexico City. Anand defended his title in the revenge match of 2008.