Chess strategy consists of setting and achieving long-term positioning advantages during the game – for example, where to place different pieces – while tactics concentrate on immediate maneuver. Chess software uses strategy and tactics internally to compete against human players. These two parts of the chess-playing process cannot be completely separated, because strategic goals are mostly achieved through tactics, while the tactical opportunities are based on the previous strategy of play. A game of chess is normally divided into three phases: opening, typically the first 10 moves, when players move their pieces to useful positions for the coming battle; then middlegame; and last the endgame, when most of the pieces are gone, kings typically take a more active part in the struggle, and pawn promotion is often decisive.

Fundamentals of tactics
In chess, tactics in general concentrate on short-term actions – so short-term that they can be calculated in advance by a human player or by a computer. The possible depth of calculation depends on the player's ability. In quiet positions with many possibilities on both sides, a deep calculation is more difficult and may not be practical, while in "tactical" positions with a limited number of forced variations, strong players can calculate long sequences of moves.

Simple one-move or two-move tactical actions – threats, exchanges of material, and double attacks – can be combined into more complicated combinations, sequences of tactical maneuvers that are often forced from the point of view of one or both players. Theoreticians describe many elementary tactical methods and typical maneuvers; for example, pins, forks, skewers, batteries, discovered attacks (especially discovered checks), zwischenzugs, deflections, decoys, sacrifices, underminings, overloadings, and interferences.

A forced variation that involves a sacrifice and usually results in a tangible gain is called a combination. Brilliant combinations – such as those in the Immortal Game – are considered beautiful and are admired by chess lovers. A common type of chess exercise, aimed at developing players' skills, is showing players a position where a decisive combination is available and challenging them to find it. 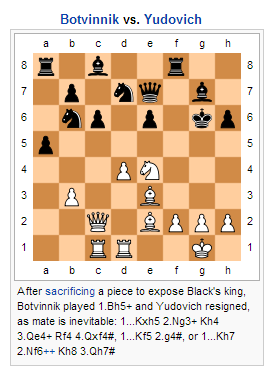 Fundamentals of strategy
Chess strategy is concerned with evaluation of chess positions and with setting up goals and long-term plans for the future play. During the evaluation, players must take into account numerous factors such as the value of the pieces on the board, control of the center and centralization, the pawn structure, king safety, and the control of key squares or groups of squares (for example, diagonals, open files, and dark or light squares).

The most basic step in evaluating a position is to count the total value of pieces of both sides. The point values used for this purpose are based on experience; usually pawns are considered worth one point, knights and bishops about three points each, rooks about five points (the value difference between a rook and a bishop or knight being known as the exchange), and queens about nine points. The king is more valuable than all of the other pieces combined, since its checkmate loses the game. But in practical terms, in the endgame the king as a fighting piece is generally more powerful than a bishop or knight but less powerful than a rook. These basic values are then modified by other factors like position of the piece (for example, advanced pawns are usually more valuable than those on their initial squares), coordination between pieces (for example, a pair of bishops usually coordinate better than a bishop and a knight), or the type of position (knights are generally better in closed positions with many pawns while bishops are more powerful in open positions).

Another important factor in the evaluation of chess positions is the pawn structure (sometimes known as the pawn skeleton), or the configuration of pawns on the chessboard. Since pawns are the least mobile of the chess pieces, the pawn structure is relatively static and largely determines the strategic nature of the position. Weaknesses in the pawn structure, such as isolated, doubled, or backward pawns and holes, once created, are often permanent. Care must therefore be taken to avoid these weaknesses unless they are compensated by another valuable asset (for example, by the possibility of developing an attack). 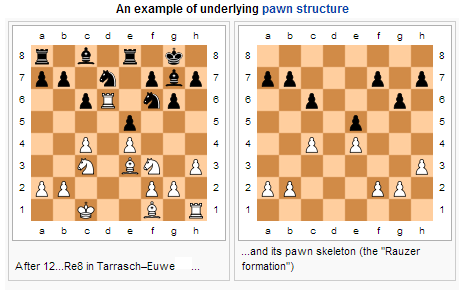