Chess - How to Play

The official rules of chess are maintained by the World Chess Federation. Along with information on official chess tournaments, the rules are described in the FIDE Handbook, Laws of Chess section. This article will help you to play the game, Chess

Setup
Chess is played on a square board of eight rows (called ranks and denoted with numbers 1 to 8) and eight columns (called files and denoted with letters a to h) of squares. The colors of the 64 squares alternate and are referred to as "light squares" and "dark squares". The chessboard is placed with a light square at the right-hand end of the rank nearest to each player, and the pieces are set out as shown in the diagram, with each queen on its own color.

The pieces are divided, by convention, into white and black sets. The players are referred to as "White" and "Black", and each begins the game with 16 pieces of the specified color. These consist of one king, one queen, two rooks, two bishops, two knights, and eight pawns. 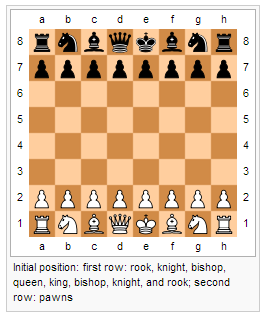 Movement
White always moves first. After the initial move, the players alternately move one piece at a time (with the exception of castling, when two pieces are moved). Pieces are moved to either an unoccupied square or one occupied by an opponent's piece, which is captured and removed from play. With the sole exception of en passant, all pieces capture opponent's pieces by moving to the square that the opponent's piece occupies. A player may not make any move that would put or leave his king under attack. If the player to move has no legal moves, the game is over; it is either a checkmate (a loss for the player with no legal moves)—if the king is under attack—or a stalemate (a draw)—if the king is not.

Each chess piece has its own style of moving. In the diagrams, the dots mark the squares where the piece can move if no other pieces (including one's own piece) are on the squares between the piece's initial position and its destination.

* Pawns can optionally move two squares forward instead of one on their first move only. They capture diagonally (black "x"s); they cannot capture with their normal move (black dots). Pawns also are involved in the special capture called en passant.

Once in every game, each king is allowed to make a special move, known as castling. Castling consists of moving the king two squares along the first rank toward a rook (which is on the player's first rank) and then placing the rook on the last square the king has just crossed. Castling is permissible only if all of the following conditions hold:

When a pawn advances two squares from its starting position and there is an opponent's pawn on an adjacent file next to its destination square, then the opponent's pawn can capture it en passant (in passing), and move to the square the pawn passed over. However, this can only be done on the very next move, otherwise the right to do so is forfeit. For example, if the black pawn has just advanced two squares from g7 (initial starting position) to g5, then the white pawn on f5 may take it via en passant on g6 (but only on white's next move).

When a pawn advances to the eighth rank, as a part of the move it is promoted and must be exchanged for the player's choice of queen, rook, bishop, or knight of the same color. Usually, the pawn is chosen to be promoted to a queen, but in some cases another piece is chosen; this is called underpromotion. In the diagram on the right, the pawn on c7 can be advanced to the eighth rank and be promoted to an allowed piece. There is no restriction placed on the piece that is chosen on promotion, so it is possible to have more pieces of the same type than at the start of the game (for example, two queens).

When a king is under immediate attack by one or two of the opponent's pieces, it is said to be in check. A response to a check is a legal move if it results in a position where the king is no longer under direct attack (that is, not in check). This can involve capturing the checking piece; interposing a piece between the checking piece and the king (which is possible only if the attacking piece is a queen, rook, or bishop and there is a square between it and the king); or moving the king to a square where it is not under attack. Castling is not a permissible response to a check. The object of the game is to checkmate the opponent; this occurs when the opponent's king is in check, and there is no legal way to remove it from attack. It is illegal for a player to make a move that would put or leave his own king in check. 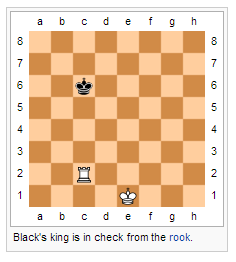 End of the game

Although the objective of the game is to checkmate the opponent, chess games do not have to end in checkmate—either player may resign which is a win for the other player. It is considered bad etiquette to continue playing when in a truly hopeless position. If it is a game with time control, a player may run out of time and lose, even with a much superior position. Games also may end in a draw (tie). A draw can occur in several situations, including draw by agreement, stalemate, threefold repetition of a position, the fifty-move rule, or a draw by impossibility of checkmate (usually because of insufficient material to checkmate). As checkmate from some positions cannot be forced in fewer than 50 moves (such as in the pawnless chess endgame and two knights endgame), the fifty-move rule is not applied everywhere, particularly in correspondence chess. 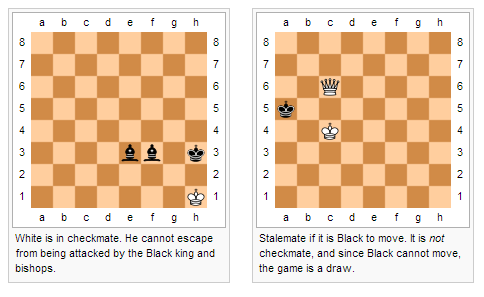